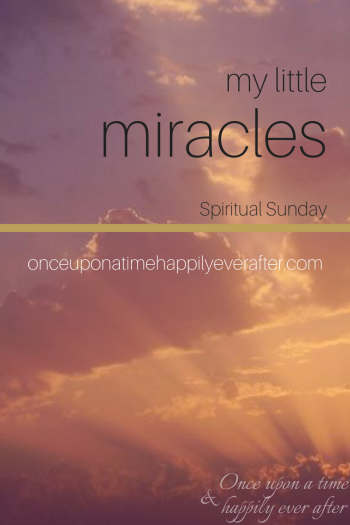 It has been awhile since I have posted on a Sunday but today’s the day!  Don’t know about you but this week was an emotional roller coaster ride for me.  One moment, my heart was filled with gladness, the next moment I felt as if the wind had been knocked out of me.  I do realize that life is a series of valleys and peaks but this week felt like more valleys.  Let me explain.

That heading sounds like I am going to launch into a retelling of some kind of Native American or African folktale.  Actually, that’s how my Monday started.  Sat straight up in bed from a dead sleep agonizing about all of the starving and abused children and animals in the world.  Not sure what prompted me to wake up that way but I did.  So I said a prayer for them.  But what should that prayer sound like?  What can I pray for that would help them?  I felt so helpless and ill-equipped.

Then my youngest daughter Lauren called crying in sobs so intense that she could hardly speak.  I immediately thought something terrible had happened to her or the baby, Lucia.  Lauren kept asking in choking cries if I had seen the videos and texts she had sent me.  It was too early for me to have turned on my phone, and I was still in bed praying for all of the children and animals in the world so my reply was no.

Once I got Lauren quieted, she was able to explain that every morning a neighbor’s kitty would stop by her backyard and sit on her window ledge.  She would look for the kitty first thing each day.  Then the kitty stopped showing up.  Lauren was worried what had happened to it.  She rewound the video footage from the cameras all around the exterior of their house and yard.  Sadly, at dawn a few days before, the cameras caught the kitty coming into the yard.  But it was followed by a coyote.  And then there was footage of the heart-breaking, inescapable outcome.

So, Lauren and I spent a few moments crying together on the phone.  For the kitty, who had brightened her mornings.  For the coyote who must have been desperately hungry to come into her residential area for food.  And for the starving and abused children and animals of the world.

Once we were able to pull ourselves together a little, Lauren posted a warning on her neighborhood Facebook page, alerting everyone to keep their small animals indoors.  The owner of this kitty reached out to Lauren and thanked her.  They had been missing the cat for a few days and at least now they knew what happened.  Hopefully, the Facebook post saved other pets from a similar fate.

Here’s a photo of the kitty the owners shared with Lauren. 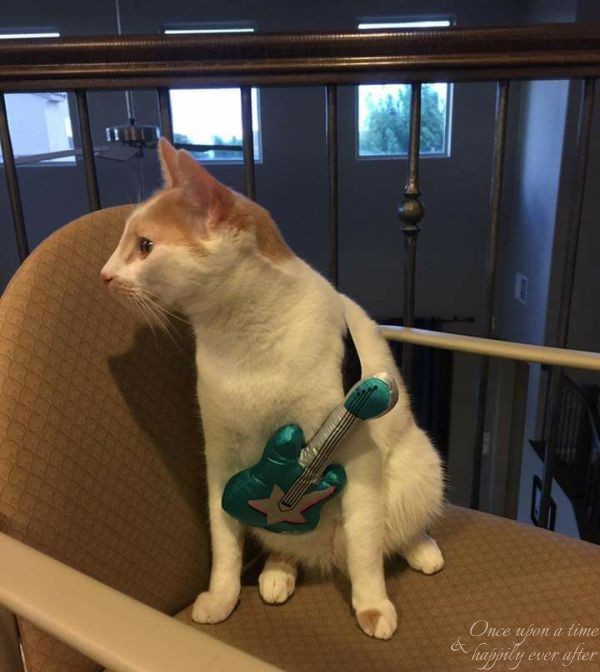 Sweet angel.  My daughters and I are such animal lovers.  No kitty or pup is a stranger.

Later that day, I was explaining on the phone to my mom about the rough morning Lauren and I had had.  My baby and I had both agreed that a glass of wine was in order for that evening.  My mom remarked something about how we didn’t know what it was like to have something really worthy of a glass of wine at night.   Maybe relatively speaking, she was right.

Cancer, That Most Loathsome, Undiscriminating Adversary

Late last week, I received a call I’d been hoping for.  The librarian had retired at an elementary school not far from my house.  I was in hopes that I would be called to sub until a new librarian could be hired. Wednesday afternoon I got that call.  I was happy to feel ‘wanted’ and ‘needed’.  To know that I would begin another school year among books and babies.

Got up early, picked out a dress, cardi and heels and arrived at Whitaker Elementary even before time to report there.  I have known the former librarian professionally for years. Was aware that she had retired unexpectedly with health problems, turning in her notice just a few weeks before the beginning of the school year.  But it wasn’t until I met and spoke with the principal and some of the faculty that I learned Pat has Stage IV stomach cancer.  Diagnosed when she went to the doctor for acid reflux.

I felt so very conflicted about being happy to receive the call to sub for someone who was so desperately ill.  How could a peak in my life come from a horrible valley in hers? What in the world kind of person was I to be excited to get the call to sub?  And this situation has happened to me before.  In the fall of 2015, I was hired to sub in another elementary library where the librarian retired suddenly under horrendous circumstances.  I wrote about those struggles with guilt, here.

When I walked into the library at Whitaker that had been Pat’s second home for years, there was a sadness, a heaviness in the air.  Almost immediately, I opened blinds on the windows that look out onto the school yard and the Franklin Mountains.  Having the light stream in helped lift my spirits a little. 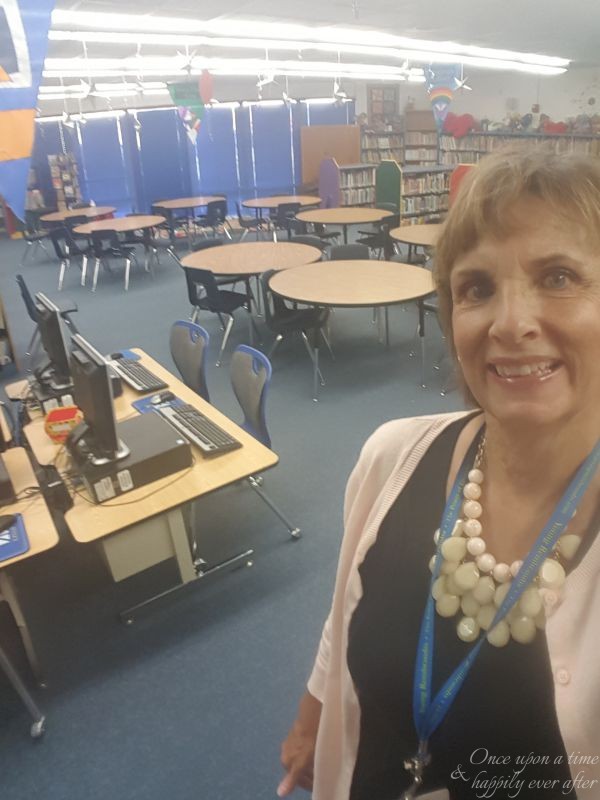 It was the assistant principal, a colleague and friend from the school where I retired, who contacted me about this job.  But apparently, Pat had asked that I be the substitute in the library she was leaving behind.  I was in tears much of my first day on the job.  Hoping that somehow my work will honor Pat’s legacy.

Through Facebook and my corner of the blogging community, I have learned of a half-dozen other friends diagnosed with or being treated for cancer this week.  My father worked at St. Jude’s Children Research Hospital as a cancer research scientist for years.  This insidious disease paid for our home, my toys, the food I ate as a child.  With all of the milestones in the world of medicine, it slays me how we still don’t have a cure for cancer.  Dad said more than once that there would never be a cure for cancer because there is too much money involved in fighting it and funding research.  Somehow that seems a little like me being happy about receiving the call to substitute.  Those valleys and peaks.

As you know, the world was shaken Thursday with the news of the terrorist attack in Spain.  It was Lauren who notified me that something had happened in a phone call.  I don’t know how people who have lost loved ones in something as senseless and unnecessary as what happened in Barcelona, continue to go on.  How do those who receive a diagnosis of Stage IV cancer get up the next day?  I just don’t know if I could.

But then I read the story of Willow. 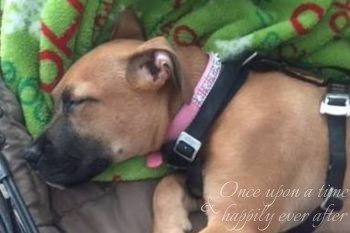 She is an eight-week old puppy who was violently assaulted by her owner.  I came across Willow’s rescuer’s plea for help through a GoFundMe link on Facebook.  When Willow was in the lowest possible valley of her life, Leah rescued her, and has gotten this pup the medical help she needed.  She is recovering from surgery in Leah’s home and the doctors are hopeful about her prognosis.  Valleys and peaks.

Ada’s Violin and Out of the Dump

I know this post has gone very long already, but please allow me to share two more stories.  Will try to be quick.

This summer, I’ve been reading the nominees for the Texas Bluebonnet Award on the master list for 2017-2018.  Check out the names of the 20 books on this year’s list, here.  Coincidentally, although there are no coincidences in life, it was Pat from Whitaker who introduced me to the Bluebonnet reading program.  She served on the committee to select the books about 12 years ago and I was her successor.  Crazy how life works.  I have written often about the program here on the blog.

This year there is a book on the list entitled Ada’s Violin: The Story of the Recycled Orchestra of Paraguay by Susan Hood, illustrated by Sally Wern Comport. 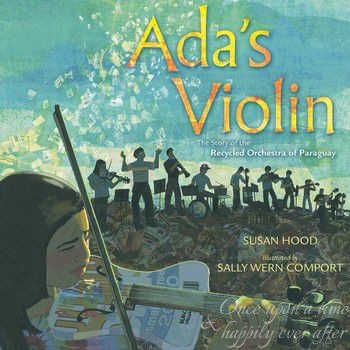 It is the true story of…

Señor Chavez took the valleys that the children of the Cateura community had been dealt and turned them into peaks.  Please take just a moment to watch this video about these children’s climb from their landfill-home to playing music all over the world.

Years ago, as I was weeding the collection of my own school library, I came across the book Out of the Dump: Writings and Photographs by Children from Guatemala edited by Kristine L. Franklin and Nancy McGirr. 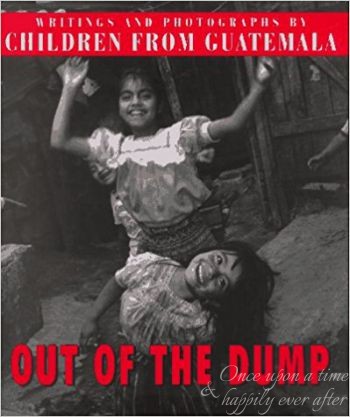 It was published in 1995 and purchased in 1997 by the librarian at the time.  The book was never checked out.  So when I inherited this library collection in 2004, Out of the Dump was a prime candidate for being withdrawn from the collection.  If no one had checked the book out in 7 years, they probably weren’t going to.  But instead of tossing it into a box of other withdrawn items, that book came home with me.  And I have kept it all these years.  After reading Ada’s Violin, I remembered my old friend Out of the Dump, and revisited it.  I found this video on YouTube.

Now as I share this year’s Bluebonnets with the students at Whitaker, I will think of Pat.  I will dust off my copy of Out of the Dump and share it with the children who read Ada’s Violin.  Valleys and peaks.

What is a peak or valley in your current life?  Do you find similar connections and what would appear to be coincidences in your life?  What words do you use to pray for brighter days?  Would love to hear from you in a comment below.

And please take a moment to enter the contest for an Amazon gift card you can use to buy a copy Ada’s Violin to share with a child you love.  Its message of hope can carry readers from valleys to peaks. 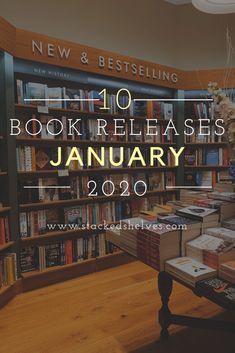 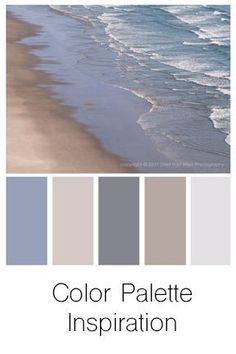