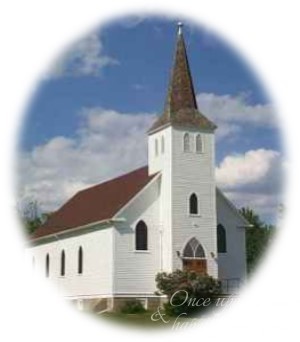 I am hoping to start writing a regular post on Sundays mostly as a reminder to myself that I have so very much to be thankful for.  I find that I concentrate harder when I write.  So when I put my prayers, my “thankfuls”, my blessings to paper, they become more concrete, less ephemeral.

And that’s what I hope to do here on Sundays.  But before I launch my regular Sunday posts, I think I should provide a little background to my very wobbly spiritual background.

As a little girl, my family didn’t attend church regularly.  Both of my parents were brought up in families that attended services (Methodist and Church of Christ) more than we did when I was a child.  The picture of the church above reminds me of the Cherry Corners Baptist Church my father’s extended family attended in the countryside of Murray, Kentucky.  It was the “perfect” church to me.  Small, cute and off the beaten path.  I remember hoping I would be married in a church like that someday.

In Boston, I remember hearing the bells of the All Saints Parish, blocks away from our house.  I loved the sound.  I think this was the first time God spoke to me.  Or the first time I heard Him, anyway.

Just recently I realized that the chimes I remembered were the same as those played by Big Ben.  I downloaded an app on my laptop that chimed just like that old church of my childhood.

(Had to finally mute it because it drove PC and my kitties crazy!) 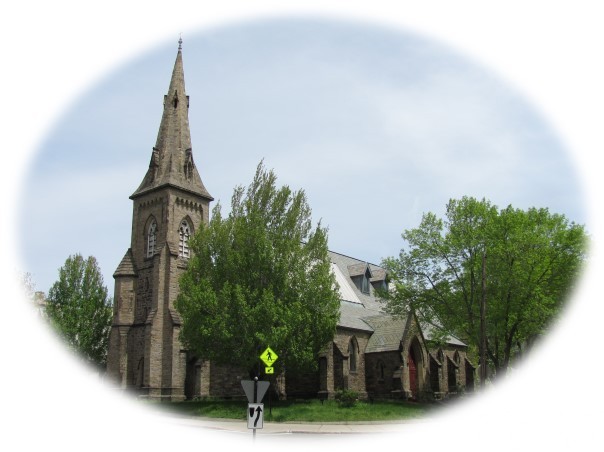 This is All Saints Parish.

In Boston, actually Brookline, all of my friends were either Catholic or Jewish.  I kind of envied them having a religion they could call their own.  Kind of like they belonged to a club that I didn’t belong to.

So I often pretended to be Jewish…even Anne Frank.  A lot.

We moved to the Memphis suburbs the summer before I started sixth grade.  My first friend in Bartlett invited me to attend Vacation Bible School at Berclair Baptist Church.  I loved going to VBS for the crafts and activities and sense of belonging.

On the final day, all of the children met in the sanctuary.  I think maybe the preacher spoke to us, thanking us for coming, leading us in prayer.

Then came the invitation, only I didn’t know what an invitation was.

I remember him asking who among us loved God and could accept him as our Savior.  He invited those of use who did to come down to the front.  I wiggled beside Jeannie feeling anxious and unsure.  Of course I loved God.  Didn’t everyone?  I slipped out of my seat and meekly made my way to the front.  This was the second time I felt God speaking to me. 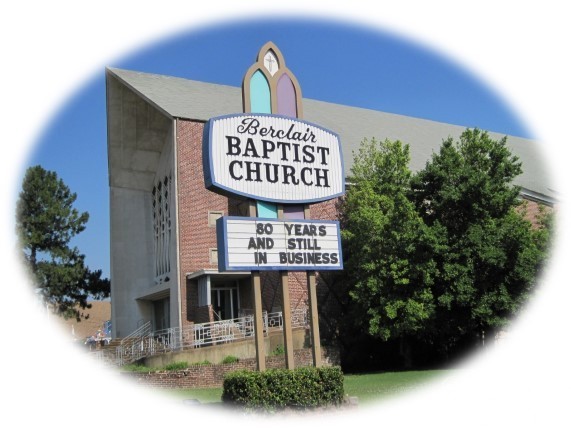 There were a number of other children who had gone forward as I had.  We were all lined up before the group of Bible-schoolers and the preacher pronounced us “saved” because we professed that we loved God, and acknowledged that He had sent His son to die for our sins.

(I rather disliked the idea then that I could have sins.  I thought I was a darn good girl.)

I was given a card to fill out with my parents’ names, our address and phone number.  The preacher told the group of us that we would all need to be baptized that Sunday.  He said someone would be calling our parents and inviting them to the church for our baptism and if our parents couldn’t take us to church on Sunday, they would make arrangements for someone to bring us.

I was too scared to tell my mother what I had done so I suffered in silence all afternoon.  I jumped every time the phone rang the rest of the day.  I didn’t know what I had done.  What if I had committed to something I didn’t really mean to commit to?  What if I committed not only myself but my whole family?  What would my parents do?

The phone call from the church came and my mother was informed that I had been saved and would be baptized on Sunday.  I don’t remember exactly what my mother said to whomever was on the line, but the conversation was short.  She probably said that she would talk with me to be sure that getting baptized was something I wanted to do. When she hung up, she came over to where I was standing in the kitchen and asked me about what had happened at Bible school.  I told her the whole story, while fighting back tears.

And then she asked me if I wanted to be baptized.  I think I asked her what that would be like and she told me that I would be presented before the church and then dunked under the water in a special tub or pool.  I really started crying then and told her I didn’t want to be baptized.  I was so shy, so scared.

And most of all, I said I didn’t even know how to swim.

I didn’t go on Sunday.  And for years after that, I would cover my eyes when we drove by Berclair Baptist Church.  I was that scared.  And to this day, I am not even sure of what.

The following summer, my maternal grandmother in Bolivar, Missouri, became sick with pancreatic cancer and my mother, sister, brother and I went there to take care of her.  During our time there, I assisted with VBS at the Baptist church where my aunt and uncle were members.  That was a very positive experience for me and perhaps the first time I ever thought I might like to be a teacher someday. 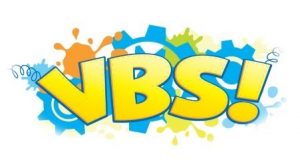 Through middle and high school, I kept the same small group of friends, Nancy, Vicki, Sharon, Suzanne and I were all especially close in high school.   Nancy was Baptist, Vicki was Methodist, Suzanne was one or the other and my life-long BFF Sharon was Lutheran (but is now Baptist).  I attended church with both Nancy and Sharon on a few occasions.  My high school boyfriend Glen was Baptist and I even attended revivals and church with he and his family.

As I got older, maybe late in high school or during my freshman year of college (Presbyterian school), my mother, sister and I would sometimes attend services at the Unitarian Church on the River in downtown Memphis.  I am not sure if my father and brother went with us more than once or twice.  The church sat on the bank of the Mississippi River. 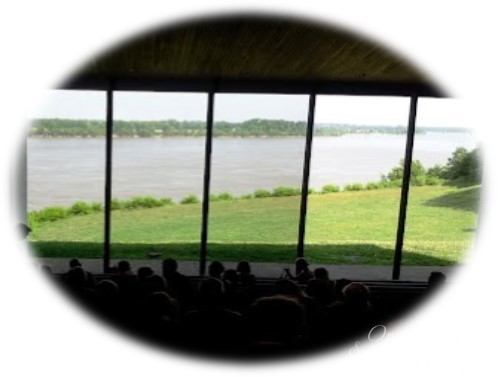 Just watching the river roll by was a spiritual experience but the sermons were very good, too.  I really liked going to that church.  I felt God’s presence with my family at this church.

When I lived in Panama, from 1981-1988 (with a brief stint in Texas in 1984), I don’t remember going to church more than a few times, and then it was to Spanish services in small Catholic churches in the interior of the country.

While we were in Panama for our first military tour, Pope John Paul II visited the country.  He was there on Sunday morning, March 3, 1983.

I was pregnant with Brennyn.  Her dad and I had driven from the Atlantic side of the Canal where he was stationed to the Pacific side to go shopping at Albrook Air Force Base.  When we arrived at the outdoor mall we usually visited and parked the car, we realized how empty the parking lot was.

Off in the distance several blocks away from the parking lot, on what had once been a landing strip for aircraft during World War II, there was a seemingly endless mass of people.  All of those people yet a church-like quiet.

No traffic, no murmur of people talking, no birds singing, not even a breeze.

Nothing, with the exception of one voice, Pope John Paul II, delivering a message and leading a prayer.

Here was one of the greatest religious leaders of our time, speaking before thousands of followers and it was as if the world or at least Panama was standing still listening.  I remember feeling a shiver run through my body.

I felt God touch me and touch my baby girl that Sunday morning through the voice of the Pope. 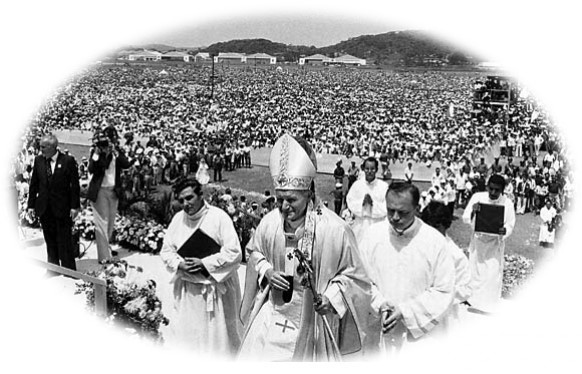 It was something I had never felt before.

This is a photograph of the Pope in Panama.  We were in a parking lot near the buildings you can see in the distance.  All that way, all those people and I could still hear the Pope speaking to me.

Or was it God?

I really never intended for this blog post to be so long and I still haven’t finished!  But before I start writing what I hope to be a spiritual, inspirational posts on a regular basis, I feel that I should share that I am fledgling, a Sunday driver, if you will, in the area of religion.  But I have a brilliant Master showing me the way.

Please come back again to read, Part II, of my on-going spiritual journey.

In what felt like the blink of an eye, I have gone from full-time wife to my sweet husband, hands-on mom to my two beautiful daughters and elementary school librarian to a retired, empty nester with lots of time on my hands. Join me on my journey to rediscover who I am. Glad you are here...
END_OF_DOCUMENT_TOKEN_TO_BE_REPLACED 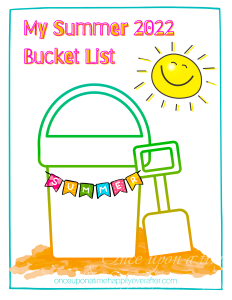